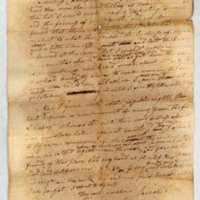 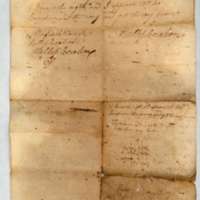 I’ve now before me while writing a [letter?] directed to Robt Parker, in which is requested reimbursement of moneys thou had to pay in serving as a witnefs for Hampton O’s [Teage?] (as I suppose ___ as __ I’ve heard thee more than once talking of the affair and told thee that I would make inquiry respecting it and the fairness of the request, and in doing this found that thou was altogether mistaken With respect to what thee then [founded] the witness of thy claim upon and a little time after met and told thee so I informed at the same time that I wished more conversation on that affair (as thee was [sent?] little time then??) have not as yet seen ___ as I remember of nor heard much about it, only that thee had baced thy claim to one or more in the same way thou had it to me and which I don’t fear to ever th--- thou art altogether mistaken; untill I saw thy later dated today.

Now I querie with what pofsible right thou hast to require a reimbursement of money from the friends of richsqr. Wheras the suit thou was distres about was one slave holder against another (______) I appeal to thy own conscience if this was not thy impression when we talked together on the road when so much was said about a promise made there, now as far as the friends of this place had any hand as plantif thou recd (and that from me) $1.50/100 p day for thy going to Virginia and while I was in Virga on the acct. thy expense paid besides unless Ive forgot, I appeal to thy rect.

As thou are riding perhaps near my house or thy Bail Businefs as an officer, I wish thee to call and take up [conversation?] on the subject and see what [earns?]. If I am [w]rong I am willing to be righted, I tell it in this case whatever ________________.