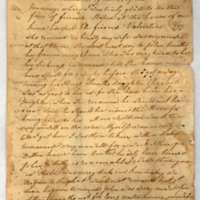 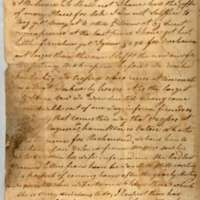 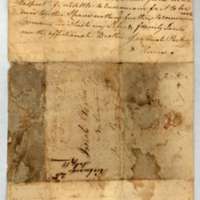 This may inform that the rest of us got Safe to the Settlement of the 21st of last mo. on 1st day Evening, where I was truly glad to see the faces of friends. Stoped at the house of our kind hospitable friend Valentine Pegg who received us kindly my wife was very unwell at that time She went next day to John Smith’s her former neighbor who was very kind to her, her sicknefs increased till She had a midling hard Spell for 2 weeks before She got away. Dureing her Illnefs Smiths daughter Elizabeth was a good to her as ife she had been her own Daughter, when she recovered, he would not have a cent Said he Should bee none the pooer for being kind to her all our children was at time verry unwell on the road Myself was mostly well till I got here I was then taken with a sickness unnamed very unwell for a week I then got Better have been Quite hearty ever since John & Sally is reasonable Well there youngest child was verry sick in kentucky We Began to think it would not recover but it soon began to mend John was verry ______ of the times tho not for long continuence my wife is yet weekly tho I hope Still mending we got a temporary home tolerable house for these parts Especially for new comers old setters some of them have good houses I feell myself as well satiffied as I could expect to be under existing circumstances it is a time of Scarsity for this country corn is not be had in many Places Some will spare a little owing to the many new comers last fall & this Spring wheat is not so scarse it 45 cts pB Bacon is 10 tho not verry plenty but we not suffered yet & I believe we Shall not. I have had the offer of many Places for Sale I am not Satiffied to Buy yet some at 6 others 5 some at 3$ [Porist?] unimproved at the last price I have got but little firnature yet I gave $294 for Duchoven not larger than the one I left the new one for the Journey Broke open before we reached kentucky we crofsed ohio river at Cincinati on a Boat worked by horses. It is the largest city I Ever saw we were directed wrong came considerable out of our way, inform friends on ____ Body that comes this way that crofses at the city Enquire for hamilton or Eaton or both then Enquire for Richmond, we have been to the house of Beloved friend Wm Wms saw his wife & children his wife informed me She had just received letters from him he was well, still conting his prospect of coming home after the yearly Meeting requested his wife to meet him there which She is verry desirious to do, I Expect thou has received a letter from me wrote from Hawkins county in Tennessee at the house of John Bittle informing thee of our distrefses in the lofs of Dear son Richd. if thou has not recd. that little further information might be given Albertson said it was inflamitarry fever Which he had, it was a clofs trial to part from him tho I firmly Believe our lofs is his gain having this confidence amidst our mo[u]rning this is a consolation, I feell a near sympathy with thee in the destrefses which I Expect is many. Please to give my ardent love and affection to all the famly & to the little dear children & also to my dear sister & her children my desires for them & sister mary & children is beyound my Exsprefsion greatly desiring there advancement in the truth greatly disiring for them to keep there places in society not to be out there affections after ______ loves I have been at this place about 10 days it belongs to Joseph Mills a unsettled man it is about 3 miles from Richmond rather a new setled place I met Some Simpathising friends in this place I feell myself as well satisfied as I could ____ be in my Situation I hope never Shall re___ living here for I often said in my heart if _____ way was perverse I greatly desired something might stop me for it was a Solemn time to part from you all, we have attended the preparative Monthly & Quarterly meetings at White Water our Esteemed friends Ruth Bosset & Mary Jones attended the Sc. meeting we heard from our uncle & Aunt at Mt. Pleasant & all there children said they were all well. they were neighbours to Wm & Elizabeth Patirson Sc. they were well & Thos. & Achsah Paterson & was well Mary Jones is Mother is George Parkers wife they appeared to be glad to us here Our children Sally John Robert Jemima & Catherine, Isaac & c all desires to be Rememberd to you all in near affection. John lives near Richmond About 2 1/2 Miles from us we Exspect if we Settle to Endeavour for it to be near together. I have nothing further to communicate. I remain in which my wife & family Joins me thy affectionate Brother