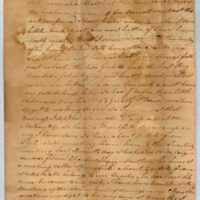 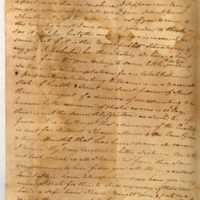 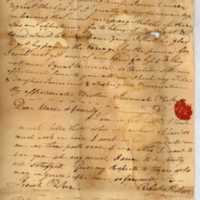 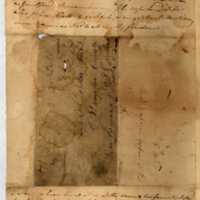 This may inform that we are mostly faviourd with reasonable Health at this time Except my wife she has been very unwell for several days past tho not confined I have been under complaint some little time past, am now better of have been Mostly midlin health since we came to this country after being worked with lime stone water, in Short I have not been as healthy in Several falls past as last, the two girls looks the best they Ever did, John Enjoys good health Sarah is about as She was before we came here, only did not have any fall sicknefs like we had Before, there little children is very healthy, & greatly Pleased when we got to making sugar we [were now?] at that Businefs, I suppose we made 3 [cwts?] or upwards a little Molases & c. We have a Beautifull sugar camp as any I have seen we live about 5 Mile from White Water meeting have been to the Quarterly meeting last Seventh day which was verry large our dear friend Charles Osborn was there he lives at a meeting called Springfield about 24 Mile from White Water belongs to our Quarter, he has been sick since he came to our parts, I have been troubled with something of the same kind of disinefs in my eyes which accations my sight to be very dim at times tho I think my nerves is Strengthened I hope this will find you all Enjoying health, I Believe John was Sorry when he heard his father had Bought land he said he would not give his 40 Acres for the Whole of the Bittle Place he appears satisfied he has rented a 10 Acre field of Prime land to [give?] 1/3 for it We have About the same Quantity we have a few Acres in wheat our land is Quiet in an uncultivated state I have a log house cut 20 by 16 Plank laid down for under floor a log chimney back & sides done up with stone we live about the same distance apart as we did in carolina I suppose our land if in no.ampton would be worth 30 or 35$p acre I do not know wheather it would be Better for the rest of you to come to this country or not I am sure if you were to think as I do it would be best, the new Purchase is made it sd. some parts of it is the Beautifullist Situations of any yet Inhabited be the Whites, we live about 1 mile from Wm Wms Belong to same little Indulged meeting we have in contemplation for an Establishment & preparative Meeting William is in a reasonable State of health & Quiet in Sweet frame of Spirit there is a prospect of division of our mo. meeting to be known by the name of Chester as ours is so large there is not the same Siteffacton as would be if fewer it is also though that a division of the Quarterly is not far distant I have attended 4 Quarty. ms I received thy verry Exceptable letter wrote in the 8th mo last which is all I have recd. from thee I am verry disirious to here from you all tho in a distant land I often have retrospective views have you in my mind, I wish for thee to Send my mony if thou can have a safe hand I have Bought corn & pork on a credit the money will be on demand in 7th & 8th Months next I know of no Better paper N C State Except U S Bank there is a Discount on all but the U. S. B at the land office if thee could send in the U S I Should be verry glad as it accations considerable of Discount before we can get it fixed for the land Business. I wish thee to write to me I have a hope Every week of hearing tho have hitherto been Disappointed, I gave 4$ for Pork 31 1/4 cts for corn it is higher now perhaps 37 1/2. James Peelle informed Robert $4 1/2 was all he had offered for my gun I much regret not fetching of it & My carving knife I much more regret the lofs of it greatly to my disadvantage in leaving that most necefsary Articles if there was an opportunity for to have it Brought & ____ would let me have again I should be glad to get by paying the cariage by the pound for I could not get one of any kind for lefs 5$ they not near Equal to mine so conclude with my affectionate love to you all in which my wife & Daughters Joins me & wishes your Preservation

I am in good health, I think much better than when in Carolina. I have so much work on hand I dont expect you will see me in them parts soon if ever altho I want to see you all very much I seem to be pretty well satisfied. Give my respects to those who may inquire after me so farewell

P S Please give my affectionate love to my Dear Sister & her Dear little children & to Sister Mary & her dear children whome I feell concerned for there welfare it was with sorrow we hear of Peggy’s Down fall, I want to know where thy Daughters husband lives and Where Paraby & Moses lives Please to remember My love to all Enquiring friends in thy freedom & Particulars to Thos. Peelle I wrote to him last fall by Private & also to several others I am rather doubtfull they did not get along in season I exspected they would have gone to your yearly meeting & they were put in Private hands, after and as far as Guilford. Remember me to Eli Copeland & wife also John Hall & so I cold go on, without Mentioning more names as I sd to all in thy freedom.

I want to hear how it is with Sam & his family I shod be glad he was here if he wishes. Boys would fetch him 120 [pyear?] or he & his Boys might live very easy here to what they can there I would Earnestly prey for them to come if there could be a chance I want to know if B. R. & J. P. & W. B. wheather they ____.