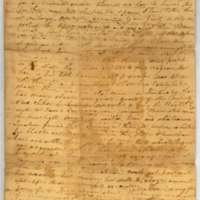 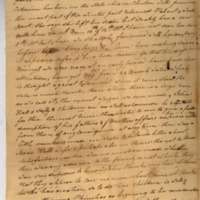 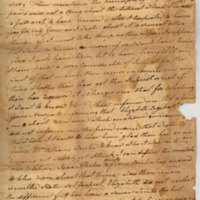 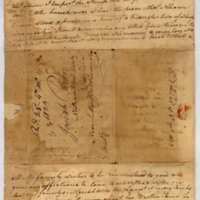 I thought I would begin to write in answer to thy letter, may say we are in tolerable health, people generally except William Williams he is quite weakly and considerable cough. As Relation to thy queriing in respect to moving, people and settling them in this state, may say for a Round answer, There is no Law to hinder, And further may tell the trouble & pains I have taken there is a large committee appointed by our yearly meeting on acct. of the African Race, to and and afsist them in many Respects, But there has not been a siting of that committee since thy letter came to hand, yet I have shewed it and advised with several of them, and amongst the rest Charles Osborn. They all tell the same story that there is no law to prohibit, Altho there is some people in this State that is no friends to free Negroes, But there is but little favour askd. of such. Now let me tell thee of a circumstance that has lately taken place, There was an old man in Kentucky that had many slaves and great quantity of other property & no child, he became concerned to free the blacks. He wrote to David Purvieance an emmint minister among the New light society he wanted him and whatsoever Quaker friend that Purviance though proper, to take his blacks and money over in this state & purchase land and settle them while he yet lived, which Request was acquisced with & those men attended to the busynefs all things were rightly arranged until signing the [wanting?] and delivering up the money then the poor old Kentuckian could not part with his money but made his will to the above amount and left these men his executors, There is very often some of the Kentuckyans about Richmond in search of Runaways its seldom any is got, they cannot be apprehened and jailed without Positive proof which often fail in making, not long since there came a man to Richmond, laid hands on a black man brought him to trial he was cleared he laid hold on him again and struck him he was immediately prosecuted for an afsault and Battery & fined so he left the negro and went off.

[A new writer takes over as follows:]

As Robert has wrote the foregoing I though I would now finish my narative and send it on by post as there is no prospect of private conveyance since I received thy last letter from new garden, we are in usual health tho my wife is much troubled with a pain in her back which is sometimes severe, our daughter Catherine has been in the State ohio in Clinton with Jemima the most part of the winter past returned about 4 weeks past, she says she left her sister but weakly has a son calls him Saml. Born 12th of 12th Mo. I have not seen her since 5th Mo. last, hope we shall be favioured with her company before very long, We have been making sugar it appears so far to be a poor season for that kind of Businefs we were ready at an early period have paid due attention, have got 105 lb from 22 Barrels water which is thought a great turn but when it runs slow the water is much sweeter than when there is a large run as we call it, the nicest sugar we ever made, John Hall & Sally & children are as well as common he requests for thee the next time thou writes to me to give a full description of his fathers Brothers affairs as he hears nothing from them of any consiquence at any time there was a little mention made in sister Copelands letter about Isaac Halls wife & perhaps also in thine tho not to there satisfaction, as there was no mention made whether there was any addition to the family or not which they were very disireous to know, John thinks very hard of them that they appear to care no more about him & I think he has occation to do so there children is well grown thirving Phinehas is beginning to be considerable help Martha has mended some in talking she is deaf which we never found out till after we came here Speak loud to her she then can understand which we have pretty much adopted is fat like her granmother Hall was when she was young I exspect John will not write any more Except an alleration our daughter Jemima sent a request to me if I had received a letter from thee I would send to her she wanted to read one from thee once more so sent to her, which I am at a little lofs in answering to thy several requests, if thou should have any oppoertunity I want thee to write to them as it wold. be very pleasing to them I think they are doing pretty well, Thou mentioned the principle of my mony was paid & said not a thing about the Interest which I made a full acct. to have received & also I Exspected to have pay for my Gun as I wrote about it & several other things, if I must take things as they appear I suppose that I am to receive [no?] more if so I would have been glad I could have been let to have brought it on want of that mony, thou never informed me any thing whether thou had got the Interest or not if thou has received it & charges me that for colecting I want to know & c. Thou informed me that a friend from New york informing that Elizabeth Cogshall [came?] about Blue river which occationed uneasinynefs did not inform me the friend name that wrote to thee which I should have been glad thou had as our friend Wm. Williams wanted to know who it was he Wms remains yet weakly yet. I think I can define the mistake our relation Isaac Parker & family from Contintiny [Contentea] moved to blue river about that time was then in an unsettled State so I Exspect Elizabeth did not recolect the difference, but has been a severe winter tho but little snow which has occationed it to be very disagreeable much more so than when snow lies, Many people has been much disappointed in what is called slaying, also it is verry hard one small grain so much frost & freezing without being covered wheat looks very deadly at present we hope it will come out yet Our sifter requested to write to her the first oppertunity her mintioning oppertunity I Exspected she ment private hand so I conclude to mention what little can remember, The corner in the edge of the swamp and mouth of the branch was a pine that William Copeland cut down I Exspect the stump can be found then up the said little branch near where the piece that Abram cleared stood & pines in a kind of triangle two of which was marked I dont remember any other line trees on the side I heard John lambs Daughter was married to some body at [F. R. S.?] I want to know who it was, Remember me to Sarah Elliot & all My family wishes to be remembered to you all give our affectionate love to our sifter & sifter in law and familys, Agreable to the request of mary Jacobs I have made some Enquiery about her Brother James he moved to blue river or I rather driftwood about 2 years ago I have not seen him since, our son Isaac is near a man in size and hight so conclude they