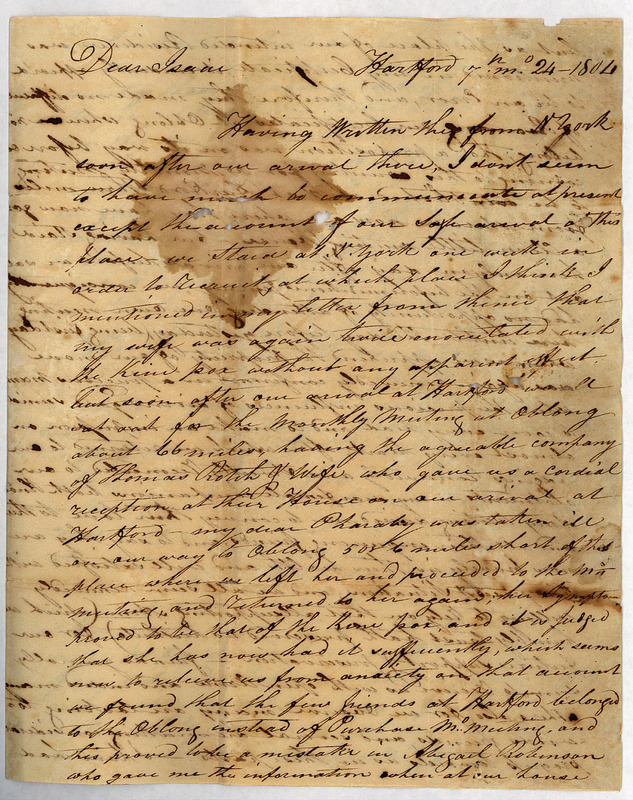 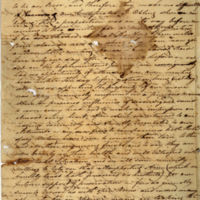 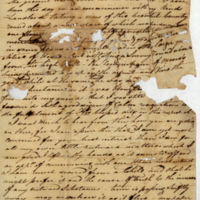 Having Written this from N. York soon after our arrival there, I dont seem to have much to communicate at present except the account of our safe arrival at this place we Staid at N York one week in order to [recruit?] at which place I think I mentioned in my letter from there that my wife was again twice enoculated with the kine pox without any apparent effect but soon after our arrival at Hartford we [ll?] set out for the Monthly Meeting at Oblong about 66 miles, having the agreeable company of Thomas Rotch & wife who gave us a cordial reception at their House on our arival at Hartford-my dear Pharaby was taken ill on our way to Oblong 5 or 6 miles short of that place where we left her and proceeded to the Mo meeting and returned to her again; her symptoms proved to be that of the Kine pox, and it is judged that she has now had it sufficiently, which seems now to relive us from anxiety and that account is found that the fine friends at Hartford belonged to the Oblong instead of Purchase Mo. Meeting, and this proved to be a mistake in Abigail Robinson who gave me the information when at our house but as the place of our intended residence was mentioned in my Certificate, it evidently appear’d to be an Error, and therefore they made no difficulty of Receiving our Certificates at Oblong where we now belong; tho a proposition was on its way before our coming to this country for a monthly meeting to be established at West Hartford three miles from where we now are where they have now got a clever little meeting House but having staid here only one day after our arrival before we sat out on the beforementioned Journey, we consequently had no opportunity of attending our own meeting here until the day before yesterday (being first day) who as we apprehend the propriety of our move was again renewedly confirmed in a precious manner [when?] the precious influences of divine good seem’d to cover every head and to make an imprefsion on almost every heart, after which we returned to our lodgings renewed by and sweetly reconciled to our alotments-my female companions both Know of my writing, desired me to convey their love to thee and all their inquiring friends, and to say they are now bravely in their health and well satisfied with the present situation, and we all seem renewedly willing to rely on that all supporting Arm (which we humbly trust hath preserved us hitherto) for our future support & preservation - friends generally seem to receive us with open Arms and indeed many others also, for we observe many are looking towards friends, and several are making considerable progrefs towards us in these parts - I have had no time yet to look out for a settlement tho a number are offering - it is a much pleasanter country than I had any idea of when here before the ground being then covered with snow. I have been this day on an emminence with my kind Landlord taking a view of the beautiful Country round about, a vast space of which may be seen one stand __________ hopeful prospects for Mon __________ [encircleling?] with of grain & gn ________ in some places with small and in larger quantities of woods-but [in?] taking a survey found about from the high hills - “The remembrance of Moses’s being permitted to go up on the [mount?] and View the good land while at the same time he was [dying?] _____ an inheritance it was brought _______ fresh into my mind. But I was still favour’d with a good degree of Calm resignation to the judgment of His blefsed will in this respect etc. I want much to hear from thee how you are getting on there, for I can afsure thee that I am yet more concerned for your best interest than I am for all my own little outward matters which I am glad I left in thy hands, as it seems to afford an opp. of communing with one Whose best interests I have much desired from a Child and that he might prefer it and the cause of Truth to the increase of any outward substance - time is pafsing swiftly away may we enhance it as it flies - my paper is almost full, therefore accept my best wishes while in sincere love I bid thee farwell