"Dancing among the students at Earlham would make the social life of the college much more attractive and might be an added inducement to attendance at that excellent educational institution.”

As a life-long Richmondite and Quaker, there is no question that Esther Griffin White would have had many interactions with Earlham. During her lifetime, Esther engaged with Earlham in a variety of ways, many of which centered around her cultured life and journalistic endeavors.

Esther’s family was already involved in the Earlham community before her birth. As Quakers, her relatives served as trustees of the college, and her father earned his bachelor’s degree there in 1860. Because she had not finished her primary school education, Esther’s father encouraged her to take some classes at Earlham, which she did between 1886 and 1887.[1]

Throughout her life, Esther was committed to bolstering Richmond’s cultural awareness and capabilities. In the fourth issue of her self-published “Little Paper,” Esther condemned the influence of Earlham’s religious leanings upon cultural activities (in this case, a lecture on theater by "celebrated litterateur" Lady Gregory).[2] Additionally, in a Palladium article, Esther noted that “dancing among the students at Earlham would make the social life of the college much more attractive and might be an added inducement to attendance at that excellent educational institution.” [3]

Esther’s reputation of being an erudite and knowledgeable lecturer on a number of topics was not lost among the students of Earlham. She was frequently asked to speak at various college events and club meetings. In 1932, The English Club invited White to have a debate with E. Merril Root about the “merits of Sinclair Lewis…Miss White will defend the election of Sinclair Lewis as the most representative American novelist of recent years.” In 1933, Esther joined Professor Root for a discussion concerning “Dramatic Criticism,” in which she “emphasized the fact that all critics should be experienced in the art which they criticize, and gave a humorous description of her own line of newspaper work. Both speeches were interspersed with witticisms, and were very entertaining.”

There has always been much debate about the relationship between Richmond and Earlham, and Esther was never one to shy away from giving her opinion on a particular topic. In 1916, Esther congratulated Earlham College because they staged a centennial celebration for the community. In this article, Esther insinuated that there were people on city council who were not in tune with the desires of the public because they asserted that “that people of Richmond didn’t want a pageant.” With this quotation she juxtaposed Earlham’s pageant, which she considered to be well-done and well-attended. Additionally, “that a member of the Earlham faculty is the president of the Drama League [a collaboration of faculty from Richmond’s public schools and Earlham] demonstrates the part Earlham College plays in the life of the community at large and is a refutation of the statement frequently made that the college is detached from the interests and life of the city.”[4]

In the 1910s, Esther announced her decision to donate her art collection to Earlham College. This was met with extremely flattering articles about her in the Earlham student newspaper; one proclaimed: “About once or twice in a generation, some person arises and says something or does something which is of large and lasting benefit to mankind. A hundred years later people recognize him and acclaim him a great man, and build monuments and write poems in his honor…Such a person is Esther Griffin White.”[5] Additionally, she donated her collection of books to the library, and the Earlham newspaper noted that “A special bookplate has been designed for books to be added to the library’s collection in her name.”[6]

Esther’s connection to Earlham stands firm with her papers housed in the Earlham Archives, as well as her burial plot being in the Earlham Cemetery, which sits next to the college. 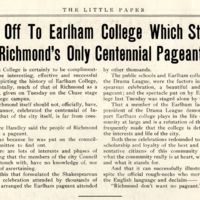 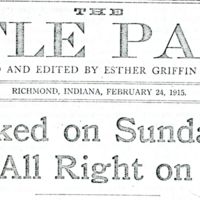