March 11, 1971 marked the third day of protest at Richmond High School in Richmond Indiana. Nearly 100 demonstrators marched outside of the Municipal Building before going to Civic Hall. About 70 students marched outside of the high school on Whitewater Boulevard demanding the suspension of John Dechant for alleged racism. A case was brought against Dechant for allegedly “man handling” a students and using derogatory racist language. The demonstrations beginning on March 7, 1971 had been organized by Earlham College but a number of the participants were local residents. Every available on duty police officer was on duty Monday morning at the high school but at 11:20am Richmond High School was closed indefinitely for the safety of the students. A student represented by Friday March 8, 1971 a number of students’s staged a sit-in in the high school, some were suspended and others quietly went back to class. Monday morning 100 of students once again participated in a sit-in in the schools honors hall until right before noon when the police asked them to leave. This case is much more complicated than just the treatment of one African America male student. In the end John Dechant was acquitted for his actions but chose to leave his job at the high school. The Dechant case brought to light the unequal treatment and education that many African American students’s believed they were receiving at Richmond High School. Students and parents carried signs that said “Prejudice Has No Place in Richmond”, “We Demand Quality Education” and “How many years for an equal education, another 100?” The last sign in particular brings to the board the unequal education that many African Americans were/are receiving. It wasn’t until 1949 that Indiana mandated that all of it’s public schools be desegregated, this even was only twenty-two years later. The Modern Civil Right’s Movement was in full swing in the 1960’s and these high school students’s had grown up watching and hearing about marches, sit-ins and protests. This case gave them the opportunity to raise their voices and speak and act out, on the issues that were occurring in their schools. Another important question that this school closure brings up is whose job is it to make these changes? Earlham students and faculty were quick to jump in on the side of justice, but was that the right move? Many Richmondites said that it was not Earlham problem to get involved and that this was a community issue. But this leads to the conclusion that Earlham is not a part of the community and so what can be done to change this dynamic? In some ways it seems obvious that Earlham wants to be a part of the Richmond community and in other ways this campus is what keeps the divide between the college and the town so stark. Unfortunately newspaper articles from this event are difficult to understand and few records can be found in all. Dates on the newspaper articles can be found are difficult to find and not always present making the sequence of events tricky to follow. 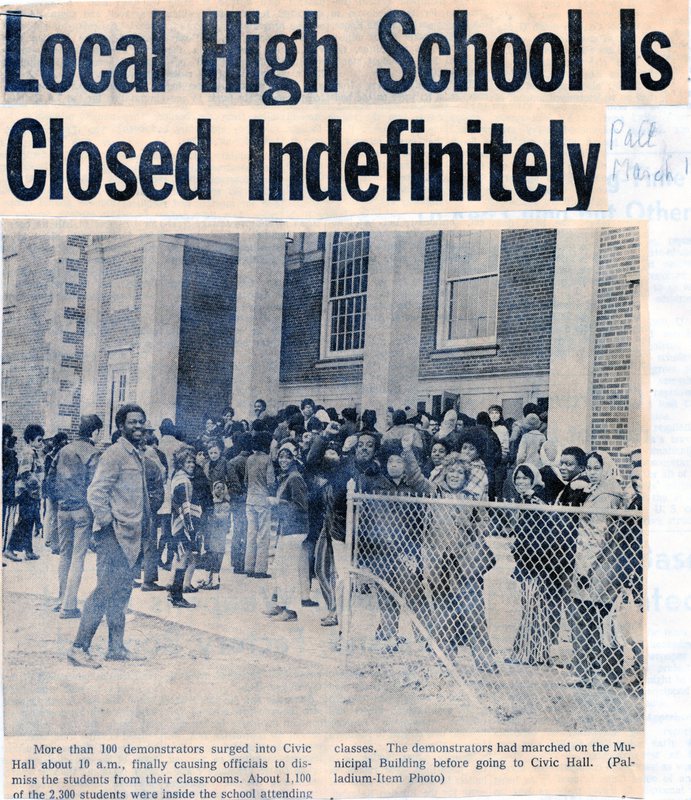 After three days of protest outside the school Richmond High School is closed indefinitely.

1971 was an eventful year for the town of Richmond Indiana. In the last weeks of Winter Richmond High School was rocked with protest, sit-ins and dialogue about the treatment of Black students at the high school. After the third day of demonstrators marching in front of the school, Paul C. Garrison, the superintendent, closed the school indefinitely. The teacher whom the complaint of racial mistreatment was brought to the school board, he was eventually acquitted and he ended up quitting his job at Richmond High School. This case had a lot of small details to it that exacerbated the issue, including a three-week delay by the Richmond Community Schools Board in bringing the charges up. This case also brought to light a number of issues within the Richmond Community and Earlham. During the protests a number of Earlham students and faculty, including Dr. Landrum Bowling, became involved in the activities. As there has been a long-standing divide between Earlham and the town of Richmond, not all Richmondites felt as though Earlhamites should be involved. Some felt a though it was not Earlham’s place to be engaged in the protests, but many people at Earlham felt the urge to support the side of social justice. This issue of race and racism in American high schools is not a new issue, nor is it one to be buried. It has roots miles and miles deep and conflicts such as this protest are just the small explosions to the larger issue. But through dialogues and understanding progress can happen. It was acknowledged that legal help from the government would not solve any of the community’s issues and that the source of aid and problem solving needed to come from within. One Earlham faculty member, Dr. Rachel Davis Du Bois, had begun facilitating small group conversations in and around the community. This grassroots effort for a more open dialogue about the divides among race, age and occupational began to happen. This led to the idea of creating a Resource Center for Promoting Dialogue and Cooperation Among Racial, Age and Religious Groups. The center was proposed to be held in Richmond, with a link to Earlham. Although they found that racial tensions were the most urgent, the cross-cultural dialogue among the older and younger generation and between different ethnic and religious groups was also deemed necessary. The purpose of the Resources Center for Promoting was to continue the conversations about community tensions that had begun to happen and also train members in the technique of leadership for dialogue groups. A number people on Earlham campus and in the Richmond community had already been trained but the goal was for many others to learn the best ways to facilitate and lead difficult and often painful conversations. Dr. Du Bois who had recently retired agreed to donate many reading material including: books, pamphlets and papers that related to ethnic groups but also to the problems and techniques of open community dialogues. It is unknown whether this Resource Center was actually ever started but the proposal in it’s self is important. This type of community, grassroots organizing was critical to the time and much of the Civil Rights work we study now happened because of Community Direct Action. These issues surrounding the separation of Earlham and Richmond still exist today, and both communities could certainly profit from group conversations much like the ones that Dr. Rachel Davis Du Bois enacted in 1971. 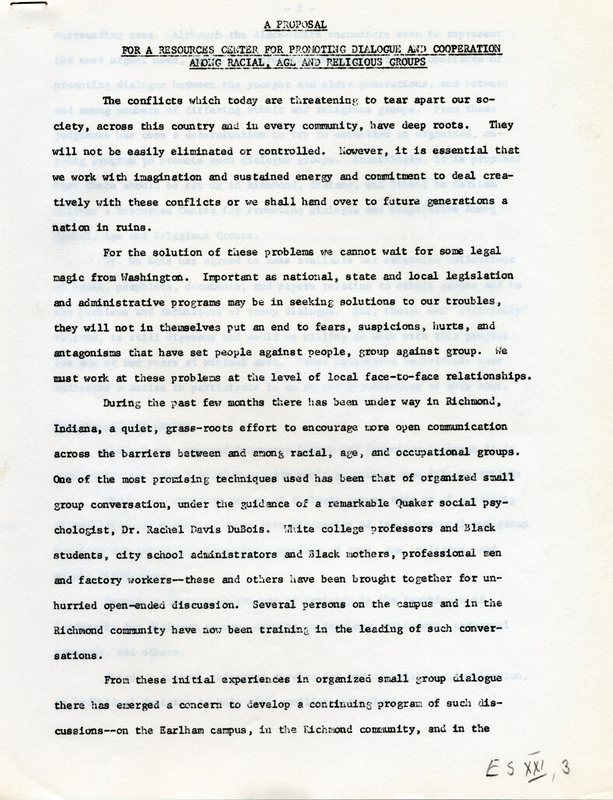 This is the proposal by a Richmond community members to promote dialogue in the town.