"He said women have no business ability and no gratitude. But he has nothing to do with this story."

-Esther Griffin White, A Plain Tale from the Prairies

It is evident that Esther Griffin White was passionate about both writing and voicing her opinions about everyday society. The mediums that Esther worked in include poetry, short stories, plays, and newspaper articles. Her strong voice in the area of social justice is undeniable. However, it is apparent that this voice is played out differently within each area of Esther's writing. Although most of her writing is infused with opinions and ideas about societal life, comparing her romantic short story collection with her political articles in Richmond’s The Palladium reveals a lot about where Esther stood on the particular issue of gender roles in early 20th Century Richmond, Indiana.

In some areas, such as her short stories, Esther felt free to write about love and loss. Her short story collection is a very personalized set of writing, seemingly opening up Esther's innermost thoughts and feelings about her life in both everyday and romantic situations. The characters in these short stories usually follow the normative societal roles of gender, where dashing men fantasize about beautiful women and end up in romantic relationships. Often, there are characters who fall outside of these roles; women who aren’t typically beautiful and who think for themselves and men who want to be with these women but are influenced too strictly by society and choose traditional beauty instead. The women in these stories usually end up unhappy, with little else besides their wit as consolation.[1] Esther’s short stories, in summary, support strong women, but reveal how society often ends up sculpting their futures.

On the other hand, the articles Esther penned for The Palladium could not be in more contrast to her dreamy short stories in terms of style. Most articles Esther wrote are clear opinion pieces. Often, these pieces included articles concerning suffrage, addressing topics such as women voters, political inequality, and unfair household duties. However, White writes almost as much about looks, attraction, and societal style for both men and women. There are articles where White will address, by name, a woman who is succumbing to old age in terms of looks and there are articles addressing the horrors of eating in front of romantic partners. In these articles, White rides a thin line between liberal, female suffragist and gossip columnist, once again pitting her progressive views against the ideas of the time. 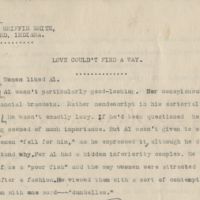