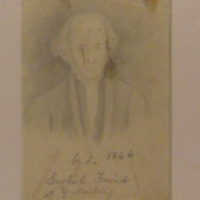 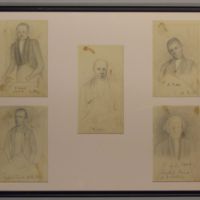 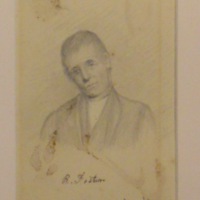 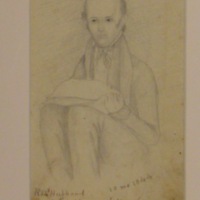 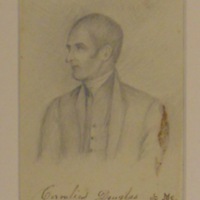 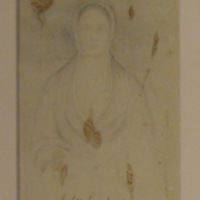 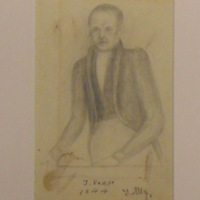 Yearly Meeting was always enjoyable for Mote, as he had plenty of things to draw. A number of sketches remain in the collection, that were drawn up by Mote during his time at Yearly Meeting through the 1840s. In 1844, he made sketches of two friends as they sat across from him on the facing bench. First of John Pease as he stood to speak during meeting, Pease was a visiting friend from England. Beneath the sketch Marcus scrawls “John Pease, Celebrated Friends minister from Darlington, England. 1844.” The other sketch that remains from 1844 Yearly Meeting depicts Richard Hubbard reading a letter. Hubbard was appointed that year one of thirty friends to receive voluntary subscriptions towards the relief of the Shawnee. Below the sketch, in Mote’s hand it reads “R. Hubbard 10th month 1844. Reading a letter from the Indians.” Information from the Indiana Yearly Meeting minutes state that a letter was received from the Indians petitioning the help of friends in their plight.” It can be assumed by the appointment of a group of friends to lend assistance, that it was the Shawnee Indians that wrote in search of help.

In subsequent years as he returned to Indiana Yearly Meeting, Mote continued to sketch those who frequented the facing bench across from him. His subjects included Sybil Jones, a prominent Quaker minister from Maine, Cornelius Douglas, who became the first superintendent of Friends Boarding School in the summer months of 1847. As well as prominent English Quakers who visited for yearly Meeting; William Forster of Tottenham, a lifelong minister and his brother Josiah Forster, Schoolmaster and Clerk of London Yearly Meeting who visited in 1845. George Stacey and John Allen, both clerks at London Yearly Meeting, also visiting in 1845. These sketches also bare notes made by Mote, though probably added much later in life as he has marked the dates incorrectly.

Influenced by the young American master, E. G. Malbone, Marcus began painting miniatures in watercolor on ivory, a very tedious and difficult technique. By this time in the mid 19th century, the miniature had already lost its popularity and gave way to oil portraits. This transition in taste was of unfortunate timing, for the few examples of miniatures available by Mote are of very high quality. The potential Mote showed in this medium indicates he could have been one of the top artists in that form, had it not fallen out of favor. In 1847, he produced a set of two miniatures, a self-portrait and a portrait of Rhoda, both watercolors on ivory and of the highest quality work.