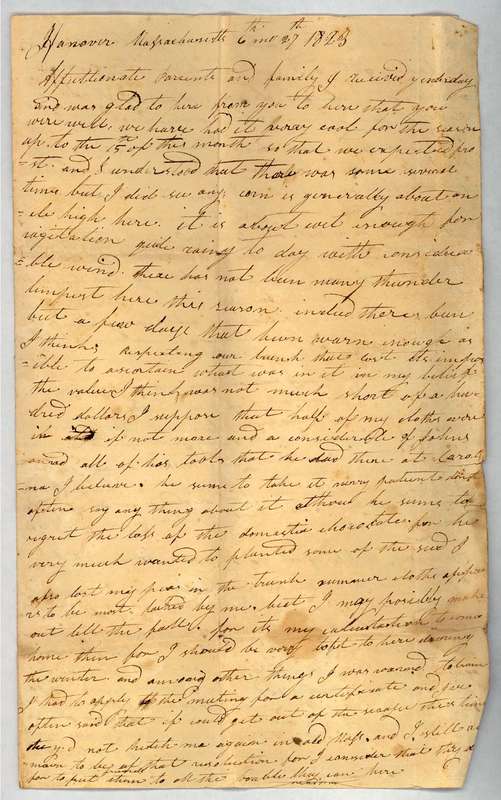 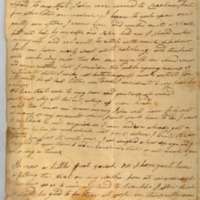 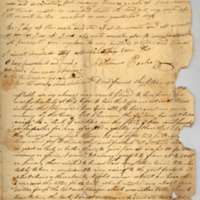 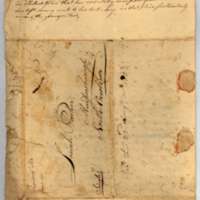 Affectionate Parents and family I received yesterday and was glad to here from you to here that you were well, we have had it verry cool for the season up to the 15th of this month so that we expected frost and I understood that there was some several times but I did [not] see any; corn is generally about [ankle] high here. it is about wet enough for vigitation quite rainy to day with considerable wind. there has not been many thunder tempest here this season. indeed there been but a few days that been warm enough as I think; Respecting our trunk that lost its impossible to ascertain what was in it in my belief the value I think was not much short of a hundred dollars I suppose that half of my clothes were in if not more and a considerable of Johns and all of his tools that he had there at Carolina I believe. he seems to take it very patient dont often say any thing about it alothou he seems to regret the lofs of the domestic chocolate for he very much wanted to planted some of the seed I also lost my [peas?] in the trunk summer cloths appear to be most [lacked?] by me. but I may posibly make out till the fall for its my calculation to come home then for I should be verry loft [lost] to here during the winter and among other things I was warned to _____ I had to apply to the meeting for a certificate and Ive often said that if could get out of the transfer this time they’d not hitch me again in old Mafs and I still remain to be of that resolution for I consider that theyd for to put friends them to all the trouble they can here

28th at half past 4 oclock am a great deal of rain fell last night and remains to be very rainy. we are as well now I believe it seems thou wants me to stay till fall after next in order the I may get so as to clean and repair clocks I think I should not be affraid to any that John ever carried to Carolina and but few others that are modern. I began to work upon one pretty soon after I came here and worked on it a spell but not holy by myself and John told me I should make one myself and so I went to work with much difidence but now have nearly about all to polishing and think it will work verry well. this ive done myself ive cleaned some and some watches but I consider the watch repairing businefs so intricket that I wish no bother myself much with it for it would be of but little use to me, I consider it a very poor businefs;

We here that wish to enjoy peace and quietnefs of mind.
Must not obey all the out calling of man kind.
Unlefs thou sends me some money John will have to by out of money on my account which I dont want him to do. I want to purchase a vise as quick as I can, and have already got a face or he has for me, which cost 4 or 5 dollars, I write this for thee to see how its with me, I was weighed a few days ago and I weighed 10 lbs more than I did in Carolina, that is not much to gain in so long a time.

Its now a little past 4 oclock pm I have just been a putting the dial on my clock been at considerable exercise so as to cause my hand to tremble. I often think I should be glad to be there at work in the pretty corn along with my Affectionate Brother Wm. when thou writes again I want thee to inform me how the little patch of wheat turns out and how affairs seem to go on with you, I long to see you all again I often think of my tender mother and aunt winny and diverse others I should mention; its quite warm now pretty much clear fine weather for vigitation I think shall not have [room?] to write much more if John writes much.

Dear sisters be careful to keep in your places and you’l receive a great reward, obey your tender parrents and you will have cause [to] be glad and rejoice I should be glad to see you and should like to know how Phebe and martha comes on a learning I want them to be attentive in learning

Dear sister Judiama be very careful when thou art among rude and disrispected women for many times girls of fine parrents get there instinct so re__unded that its hard getting out of it we cant be too careful in our youthful days.
the 6th day of the week and the 29th of the month and all is well as far as I no as I no of not much else to write about at present give my love to my brothers sisters and friends I must conclude thy affectionate son & c

O how benevolent and kind
How mild, how ready to forgive
Be this the temper of our mind
And these the rules by which we live

[The following is included in the same letter:]

Dear friend thy letter was acceptable we are always very much pleased to hear from thee and particularly at this time to hear that you are all well I was in hopes that thou would have been able to have sent me some money by this time but I presume the failure has not been owing to a lack of exertion on thy part, if thou canst purchase some feather for me of as good a quality as those that I had of thee and at any price between 33 and fifty Cents p # I wish thou would for I think that such feathers at 50 cents will be as good as Cash, or better than to give five or six pct. for __ money or specie, I would take any quantity from 25 to 50 lbs or more, thou wished to know how my Cotton turned, Cotton has lately taken a considerable run owing to the great frickets [frigates?] at New Orleans & thereabouts, I sold mine about an hour after I reseived thy letter for 12 Cents which netted me about three Dollar from the Cost and Charges, which was rather better than to have taken the Cash, I will endeavour to send on two [clocks] this fall for Berton & Reer of the description mentioned and super fine, I think of writing to J Overman soon to send two of those Clocks which he has, to thee, for I think they will not sell soon in his hands, I also calculate to send one or two with pin__ cares this fall, I think I shall send thee a pamphlet at this [time?] written by Saml. Philbrick giving a correct statement of the process of friends at Lynn, Philbrick is a man of unimpeachable character and strictest integrity, Priscilla Hunt has not been here yet but we some expect her, we hear that she has gone to understand that she met with considerable public opposition in Philadelphia and from what I can learn it originated in her saying that she had no map of the other world, and was ignorant of futurity and also understand that she was under the necessity of requesting some assistance from friends to enable her to prosecute her journey, which they referred, but the young men of the City got knowledge of it and in a few hours subscribed and presented her with 500 Dollars, I also learn from a highly respected friend in Philadelphia that her ministry was powerful and that she has left many seals to her testimony in that place particularly among the younger Class.

I have received about three Hundred bushels of corn from J. Overman but I cannot sell it for so much as it cost corn is about 60 Cent per bushel here now, I expect some more corn of him yet, I think some of going to Boston this week with Nathan to show him the City he has not been about much yet and does not seem to have much inclination to he seems to think a good deal about home his health is improved I think considerably, I have neither time nor room to write much more so must conclude with love to thee & thy family, hoping we shall hear from thee again soon.