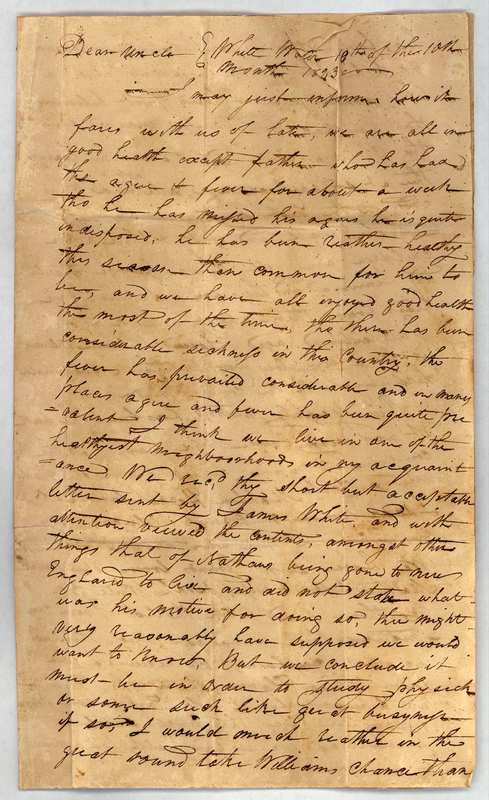 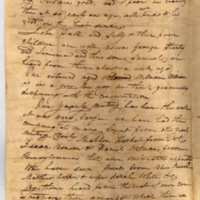 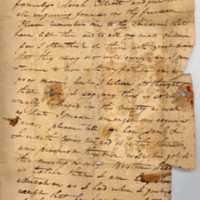 I may just inform how it fares with us of late, we are all in good health except father who has had the ague & fever for about a week tho he has mifsed his ague he is quite indisposed, he has been Rather healthy this season than common for him to be, and we have all enjoyed good health the most of the time, tho there has been considerable sicknefs in this country, the fever has prevailed considerable and in many places ague and fever has been quite prevalent I think we live in one of the healthyest neighborhoods in my acquaintance. We Recd. thy short but acceptable letter sent by James White and with attention viewed the contents, amongst other things that of Nathans being gone to New England to live and did not state what was his motive for doing so, thee might very Reasonably have supposed we would want to know, But we conclude it must be in order to study physicks or some such like great busynefs if so, I would much Rather in the great round take Williams chance than his, for I think contentment temperance & C. to be far greater enjoyments, I did a little wonder when I heard of it, believing that thou has been truly concerned for thy childrens good, and I fear his leaving thee at so early an age, will not tend to his good, in the best since.

John Hall and Sally & their four children are well, as was George Stanley and Jemima and their son Samuel, we heard from them about a week ago, Our esteemed aged Friend William Williams is in a very low way, we think generally declining with the consumption.

Our Yearly Meeting has been this week it was very large we have had the company of many friends from other Yearly Meetings, to wit, Mahlon Hocket from N. C. Isaac Bonson & Daniel Williams from Pennsylvania that were ministers approved We have seen friends from Blue River Matthew Coffin & wife Sarah White & C By them heard from the rest of our connections there, amongst which there was no great complaint, We received a letter from William Flanner stating that his wife was deceased also Jacob Parkers son Jordan & Daughter Eliza that uncle Jacob yet survived and was in good health for a man of his great age Father Mother Catherine & Isaac Desires their love Remembered to thee and them & Aunt Judith Copeland and hers Aunt Mary Parker and hers Thomas Peele John Hall James Peele & their familys Sarah Elliott and further to all enquiring friends in thy freedom Please Remember my to thy children that have left thee and to all my aunts children for I often think of them with great desires that they may do well every way. I continue to live with my father am a poor man, but I believe its thought that when I say any thing is so its generally believed in this country as well as that I mean amongst my acquaintances, please tell us how Saml & Judith comes on and whether there is any prospect they ever will be got to this country or not. Brother Isaac is taller than I am has about such education as I had when I quit school except that he has some little knowledge of the english grammer Now I bid farewell thy affectionate nephew