“Although she had done many things, she never hesitated to say the two of which she was most proud were her book on Indiana bookplates and that her name was the first woman’s to be put on the official ballot of the state of Indiana.”

Ex Libris, or bookplates, are small printed labels that are fixed to the inside of a book. Bookplates indicate the owner of a book and often warn borrows to return it. The first bookplate was created in Germany and has since been a medium that artists such as Albrecht Durer and Edwin Abbey have participated in.[1]

Esther Griffin White was an enthusiast and avid collector of bookplates, particularly bookplates from Indiana. Esther's interest in bookplates could have stemmed from a combination of her father’s bookshop management and her brother’s artistic inclinations.[2] Esther's brother, Raymond White, designed a book plate for her, rendering her with her hair down and reading a book.[3]  This bookplate design later became the bookplate used for all books donated by Esther Griffin White to Earlham’s Library in memory of her father, Oliver White.[4][1] Raymond White also designed a bookplate for Winifred White Emery, his sister.[5]

Esther wrote several short articles on bookplates, such as Indiana Designers of Book-Plates in Brush and Pencil in 1905.[6] After contacting many collectors and artists, Esther published the book Indiana Bookplates in 1910. Limited to only 250 copies, this would be her only book published. Later manuscripts Esther attempted to have published were rejected.[7][1]

In Indiana Bookplates Esther thanked several of her artist friends, such as Florence Fox and John Elwood Bundy, and praised her late brother Raymond White on his artistic genius.[8] Written two years after her brother’s death, Esther dedicated all of chapter five in Indiana Bookplates to discussing Raymond White’s courage, artistry and his untimely loss.

Ever the champion of culture in Indiana, Esther stated in her article Indiana Designers of Book-Plates that American artists could “could hold their own with those of other nations.”[9] Esther not only focused on the design, symbolism and atheistics of bookplates, but championed their artists. For example, in Indiana Designers of Book-Plates Esther discussed artists Grace and May Greenleaf of Indiananapolis, who made the Earlham Alumni donation bookplate.[10] 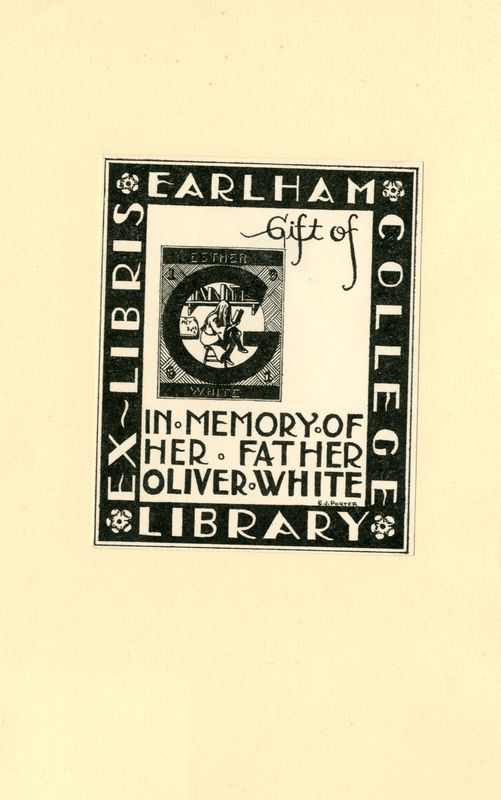