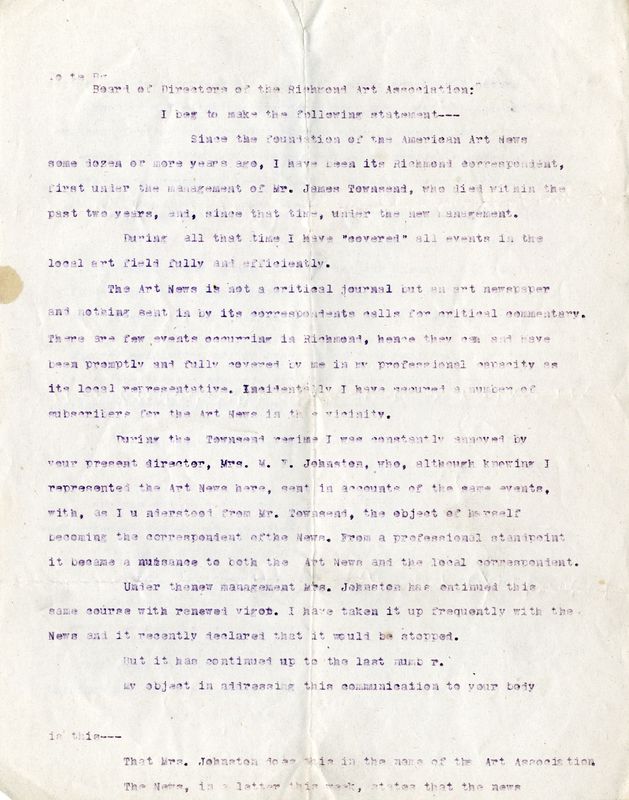 "For the Richmond Art Association, one of whose founders I am, I have nothing but good will."

The first meeting for the Richmond Art Association, which would one day be known as the Richmond Art Museum, was held on June 15, 1898. The meeting was held in the Garfield School Building on North Eighth Street in Richmond, Indiana, beginning the Association’s long running connection to education.[1] Today, the Richmond Art Museum is the only museum in the country that is still connected to a public high school. The Association was not the first large presence of the art world in Richmond, but evolved out of necessity to support a town where art and art appreciation was already booming. Painting groups inspired by local artist John Elwood Bundy had flooded into the Richmond area and art was being discussed in social groups such as the local women’s club.  Minutes and notes taken on the first meeting are still held in the archives of the museum and report that the people in attendance at the first meeting included “school people, local artists, club women, newspaper representatives, and interested citizens.”[2] Ella Bond Johnston, one of the original founders and directors of the museum writes in her book, The Art Movement in Richmond, Indiana: A History, that the group listed their objectives as nurturing an interest in art among Richmond’s citizens, providing a space to encourage local artists, and creating a gallery that would house an annual show of local work. [3]

In September 1910, after receiving much acclaim from Richmond citizen’s and a lot of funding from both the city and the school board, the Richmond Art Association moved to a new location in the Morton High School, opening its first public gallery. In 1914, Scribner’s Publishers came out with a book entitled, The Modern High School, which contained a chapter written by the Richmond Art Association’s director about the high school as an “art center.”[4] Public education is something the museum has always taken seriously, continuing the practice today as Richmond High School and the Richmond Art Museum still share a common space and use each other for programs and lesson space.

Esther Griffin White, a strong force in the Richmond Art Movement and one of the original founders of the Art Association, was in and out of favor with the Association due to a long-standing feud with Director and President, Mrs. Johnston. Although White was a well-known writer and journalist who often discussed the topic of art, Johnston often did not include her as one of the reporters in the Association’s exhibits and galleries.[5] In one instance, White wrote a letter to the Association addressing the fact that Johnston was knowingly interfering with White’s publication, Art News, by publishing her own accounts of the exhibits in local papers which was aggravating both White and the local publishers.[6] White believed that Johnston was using the Association as a means to further her own objectives and popularity, calling the organization a “synonym” for its director (Johnston).[7] However, although White had a difficult time separating the Art Association from her ongoing arguments with Ella Bond Johnston, she did have high regard for the purpose and presence of the organization in Richmond.

Quote: White, Esther Griffin. A Letter to the Board of Directors. Richmond, Ind. Pg. 2

[5] White, Esther Griffin. A Letter to the Board of Directors. Richmond, Ind. Pg. 1 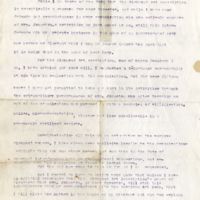