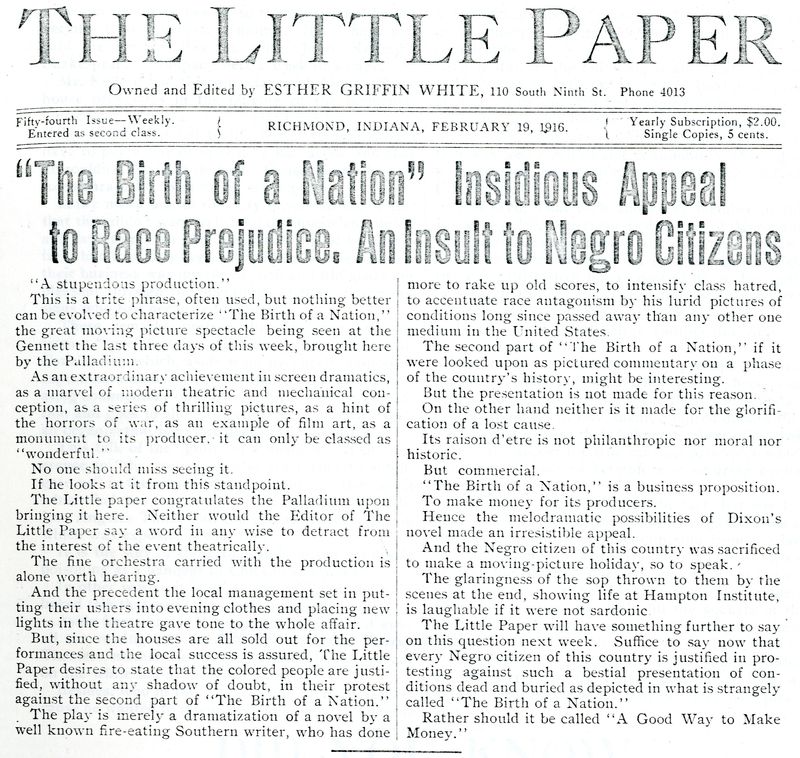 In this article, Esther condemns "The Birth of a Nation" as racist and a ploy to get money.

"Suffice to say now that every Negro citizen of this country is justified in protesting against such a bestial presentation of conditions dead and buried as depicted in what is strangely called "The Birth of a Nation."

Esther Griffin White’s political activism and commentary is notable and broad. In the early nineteen hundreds, when the Civil Rights movement was still decades away and there was widespread antagonism towards African Americans, Esther stands out as an advocate for African Americans’ humanity.

A thread of continuity in her writing concerns African American’s desire “to be permitted to live their lives like other human beings.”[1] She often notes that black citizens were born just as white people were, implying that their race was not a defining aspect of them as humans. Additionally, a month later in her writings she is clear in her journalistic intent to respect and publish people’s opinions, but not their prejudices. In the same article, she addresses the notion of skin color not being a part of someone’s personality. She notes that it is an absurd notion to vote for someone based on their race, but rather that people should determine the “fitness” of the selected candidate for their particular office. [2]

Her commentary on the premier of “The Birth of a Nation,” a movie which dramatizes the Civil War and the birth of the Klu Klux Klan, is particularly scathing. She calls the movie “an insidious appeal to race prejudice” and “an insult to Negro citizens.”[3] In her next issue of the Little Paper, Esther objects to the movie not only because of its racist leanings but also due to its influence on the impressionable minds of children.[4]

Her personal papers reveal connections to two prominent African Americans of her time. It is easily detectable that she felt great respect for Booker T. Washington. She believed that he “exemplified all of the virtues of his race,” and insisted that “no one can take his place.”[5] Her examination of Washington reveals a slight fracture in her commentary on race, noting that he was a great person of his race. I believe it can be easily inferred, however, that Estherwas not intending to examine Washington’s success only as a black man. In a particularly moving passage, Esther writes that “with the wit of the French satirists, the comprehensiveness of Greek philosophers and the diplomacy of Rome, Washington was an ultra modernist in his social activities.”[6]

She also corresponded with Paul Lawrence Dunbar; the two had a particularly amusing rapport. It is unclear how their letter writing began, but their letters imply a close and dear relationship. Clearly their connection was one of good-natured jibes and mutual respect for one another’s writings. In a book where she glued various newspaper articles, she has almost a whole page dedicated to Dunbar’s poetry. Within their correspondence is an undated poem composed by Dunbar (the context is unclear). It reads:

There is a young lady named White

Who must have forgot how to write –

I expected her here every day of the year

Additionally, in one letter to Esther (clearly in response to a message from her) Dunbar writes “I am glad if you enjoyed your trip here with Mr. Ochiltree and that you found the salad to be ‘nippy.’ That is bully, because I alone know the secret of making it, and I shall keep that to myself and hold you on tenter hooks for the rest of your mortal days.”[8] 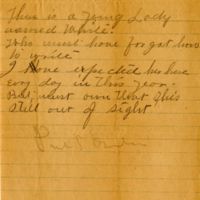