First Woman on the Ballot

"...Working men should be given a cold glass of beer after a hard day’s work as a refreshing relaxation."

-A Richmondite, in reaction to Esther's campaign platform

Women finally got the right to vote in 1920, but at the time there were no women occupying any political offices. Esther Griffin White, after succeeding in the fight for suffrage, wanted go even further by trying to get involved in politics like men. However, politics was not an area for women at the time. Despite this, Esther is known to be “the first women whose name appeared on the official ballot of the state of Indiana” (Esther G. White collection, box 5, folder 3). She was also the first woman to be a delegate at any political convention in Indiana. Esther ran for mayoralty in Richmond in August 1921 for the Republican Party, but was not nominated. She even ended up getting into trouble with the Wayne County Grand Jury. The Wayne County Grand Jury censored her because she was not able to pay back the money that she used to run for mayoralty. Esther was also accused of purchasing other things with the money that did not have anything to do with her campaign. She was not the only person in that case: two other candidates were accused of the same behavior.

Esther never gave up her fights, so in May 1925 she ran again for the mayoralty of Richmond, Indiana, again representing the Republican Party. During these times men did not want or trust women in politics; therefore, she did not get elected. After this failure, she waited until November 1938 to run again for the position of mayor of Richmond Indiana, but this time she was running independently. This time she made it clear from the beginning of her campaign that she had no funds, had no formal program and that she was not making any promises. She only counted on the “good will of the local electorate” (Esther G. White collection, box 5, folder 3). Esther’s first proposed regulations for this campaign were: Richmond public business given to Richmond people, “strict enforcement of the traffic laws,” (Esther G. White collection, box 5, folder 3) protection of trees and parks, and no discrimination regardless of race, religion, gender, or nationality.

After failing for the second time to become mayor of Richmond, Esther ran for a congressional office in 1926. In fact, she was the “first Indiana woman to seek congressional office” (Esther G. White collection, box 5, folder 3). She was mainly running to oppose the Volstead Act, which made drinking legal again in the Unites States. She was running against Richard N. Elliot, a republican candidate. This was when Esther stopped supporting the Republican Party, but at this point she had ran for them twice for mayoralty in Richmond. She defended herself by arguing that alcohol is evil and that it had done a lot of damage to American society. She also justified supported her argument by saying that she had never touched alcohol in her life, that she only drank tea. This point of her campaign was not supported by a lot of people. Somebody affirmed that “working men should be given a cold glass of beer after a hard day’s work as a refreshing relaxation” (Esther G. White collection, box 5, folder 3). Another person held that “murder is not a social question, but a crime. Stealing is not a social question, but a crime. But by no possible line of reasoning can taking a drink be classed as a crime.” Esther lost this campaign to the opposition; the things she valued at the time were not valued by people of her time, which may be one of the reasons for her not winning her campaigns. Being a woman in politics at the time was also not easy. Esther just wanted to hold an office in a patriarchal government; she wanted women to be represented in this office by a woman, not a man. 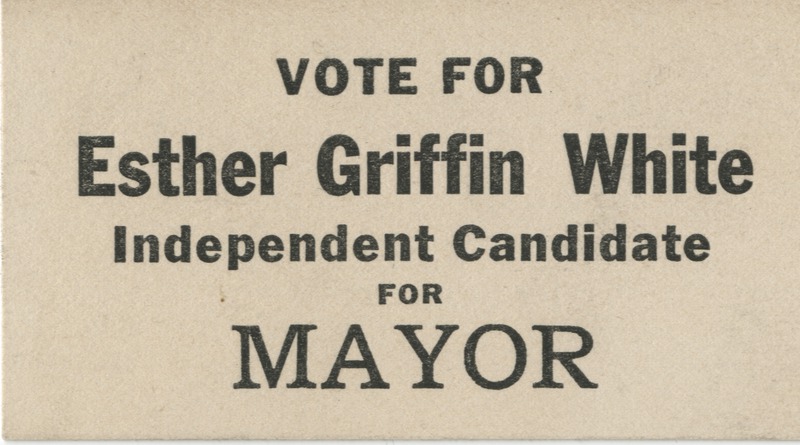