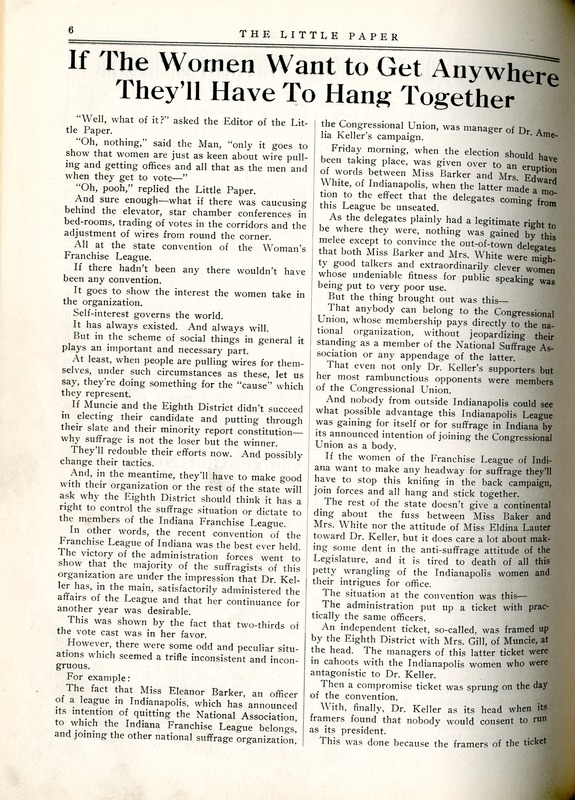 Esther was often an advocate for the unity of women's suffrage organizations, which she illustrates here.

"A woman has got just as much right to vote as much as a man."

In 1915, when European powers were at war, the United States was facing many social movements. One of those civil movements was women’s suffrage. The women of the United States had been fighting the government since the end of the American Civil War to get the same right to vote as men. There were two groups of women advocating for women's suffrage, the Suffragists and the Suffragettes. There is a difference between these two groups of women: the suffragists acted through women's organizations, but the suffragettes were more militant. The suffragettes picketed at the White House and their leader was Alice Paul. These women risked their life and were sometimes arrested and brutalized by the police. Women finally got the right to vote in 1920 with the 19th amendment.

Esther Griffin White was also a suffragist. She was a valiant defender of this cause. She was a member of the Indiana Women Franchise League, which was a suffrage activist organization from Richmond, Indiana. Sometimes these women organizations lacked funds to undertake certain actions. Esther supported women’s suffrage because she thought by denying suffrage from women, the government was also denying them citizenship. Furthermore, she argued “a woman has got just as much right to vote as much as a man” (Little Paper, May 1, 1915). In 1915, only 12 states granted full suffrage to women. In Indiana, women did not have the right to vote.

During that era, it was hard to find a politician who would risk their career by supporting the cause of women. Indiana Senators Walter McConaha and J. W. Judkins, who was a Representative of Cambridge, both supported women's suffrage. Therefore, Esther urged women to give support to such politicians. On the other hand, there were politicians who were completely against women’s suffrage. Some others even lied to women, saying that they would support their cause and then voted against it. This was the case for Finley H. Gray, who promised women from Shelbyville, Ohio that he would vote for women’s suffrage in Congress, but who  voted against it once he got there. Finley H. Gray was forced to vote against it because his party was against the cause. He had to do so if he wanted to keep his office.

The most important word that comes up over and over again when Esther is discussing women’s suffrage is “unity.” She believed that women from the state of Indiana would not be able to achieve their goal without unity. There were two major suffragist organizations in Indiana: the National Suffrage Association and the Congressional Union. The Indiana Women Franchise League was a sub organization of the National Suffrage Association. The two main Indiana suffragist organizations were rivals. Esther thought this was the main reason why women in Indiana were so late to have suffrage. Everywhere else in the United States where women had suffrage, they had united and fought for it. The National Suffrage Association’s approach was to not collaborate with any organization or any political party to reach its goal. The Congressional Union’s method was to ally with a political party to beat the democrats in power, who were rejecting women's suffrage. These two parties had been clashing with each other constantly. Instead, Esther argued that these two organizations should unite in order to get women suffrage.