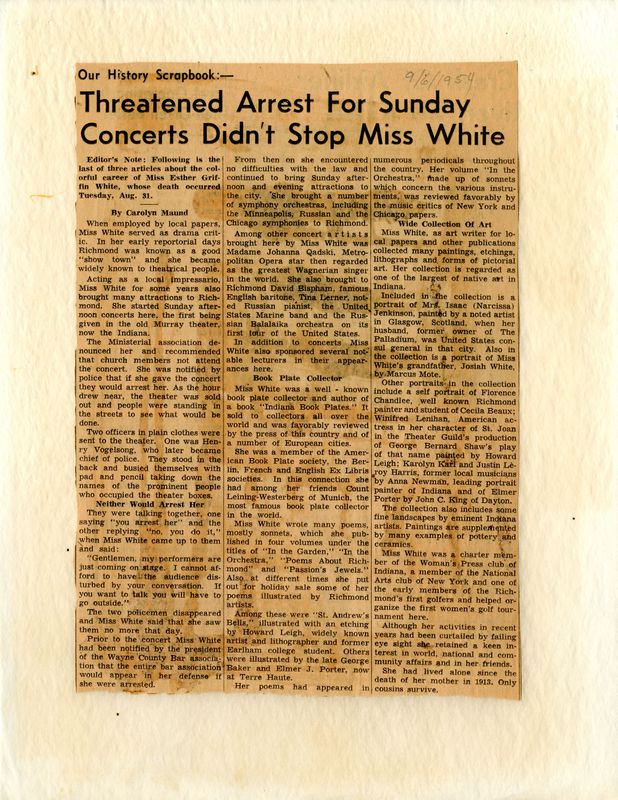 This article details a day in which Esther avoided arrest even though she was organizing an illegal concert.

"I have been informed by the police department of the city that you are intending to put on a concert here tomorrow which day as you know will be Sunday.  . . .  If they arrest you and bring you before me on an affidavit it will be clearly my duty under the law to prosecute you."

The Blue Laws, also known as Sabbath Laws, were put into practice for the first time in 1610 by Puritans living in Virginia. During the 17th century, the Blue Laws first “were directed at personal activities regarded as moral offenses, such as gambling or the consumption of alcohol” (West’s Encyclopedia of American Law, 2nd Edition, p.66). Religion played a big role in the Blue Laws. Sunday was considered as the day of church; therefore, no sinful activities were allowed. The Blue Laws forbade any form of businesses from operating but exempted barbershops and hardware shops. However, barbershops were exempt because they were not considered as “work of necessity” (West’s Encyclopedia of American Law, 2nd Edition, p.66). The hardware shops were allowed to operate but could not sell any hammers. The government also supported the Blue Laws, because it thought it was a good idea to have a day off during which people could rest. Furthermore, in the nineteenth century new stipulations were added to the Blue Laws that forbade the practice of a trade, the operation of a business, public entertainment, and the selling of tobbaco. In the 1960’s several Blue Laws were abolished, but the ones regarding selling alcohol on Sunday still exist in many states, such as Indiana, Alabama, Connecticut, Minnesota, South Carolina, Texas, North Carolina, Tennessee, Utah, Oklahoma, Mississippi, West Virginia and Montana.

There have been debates about the origin of the name of the Blue Laws: on one hand, there are people who argue that the name comes from the fact that these laws were first printed on blue papers. On the other hand, there are people who refute the previous theory and claim that the "blue" refers to the term bluenose, which means “prudish, moralistic person” (West’s Encyclopedia of American Law, 2nd Edition, p.66).

Esther Griffin White was not like other women of her age; she was a rebel. In fact, she smoked cigarettes and she wore short dresses and a big hat. In other words, she did what she wanted. She was not afraid of anything. She sometimes went against authority. In 1912, Esther organized a concert at the old Murray Theatre in Richmond, Indiana on a Sunday afternoon. This concert was an illegal concert since, according to the Blue Laws, no public entertainment could be held on Sunday. Many famous artists, such as Carl Morris, performed during the Event. Esther held the event despite receiving a letter a day before the event from Joshua H. Allen, who was a prosecutor asking her to not do it. Allen asked nicely and even said that in case she had sold the tickets already they could work something out. Otherwise, he would have to send the police to arrest her. The day of the event, Joshua H. Allen sent two policemen to arrest Esther G. White, but they did not. They were scared and left. Esther G. White disobeyed the Blue Laws without any problem.