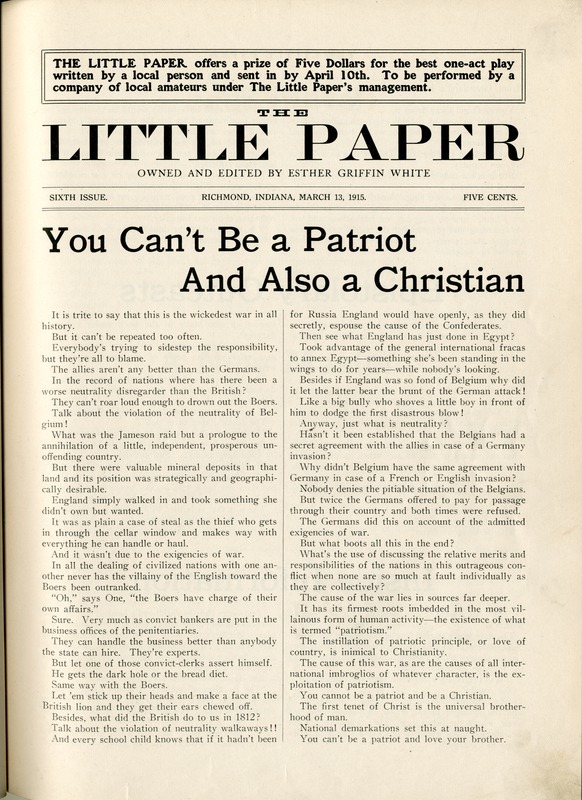 In this article, Esther outlines her views on patriotism and Christianity.

"...the most civilized humans seem to permanently reside in the jungles."

In June 1914, a Bosnian student named Gavrilo Princep assassinated Franz Ferdinand, the heir to the throne of the Austro-Hungarian Empire, in Sarajevo, Bosnia. By August of the same year World War I had begun. There were two sides fighting each other: the Germans and the Austrians on one side and the French, the British, and the Russians on the other. Americans chose neutrality at the beginning of the conflict, but in 1917 decided to join the war on the French, and British, and Russian side. This war finally came to an end in 1918 with the signingof an armistice by all the parties involved. World War I was one of the deadliest conflicts of humanity: over 10 million soldiers died in the war and there were also millions of civilian casualties.

Esther Griffin White discussed many issues in her Little Paper, ranging from national to international in scope. The international issue that she addressed the most in 1915 was World War I. First, Esther believed that all the nations taking part in this bloody war were to be blamed, not only Germany, which started it. In addition, she thought that the main reason for this war was nationalism. In fact, she said “just as long as we sing America or the Marseillaise or God Save the King or Die Watcht am Rheim, just so long are barbarians and retarding the progress of the world toward that Utopian state where every man’s hand is not raised against his neighbor.” (Little Paper of March 13, 1915) Esther also thought that civilized nations were not acting civilized by engaging in this bloody conflict. According to her, Europeans were less civilized than the people they colonized; she asserted that “the most civilized humans seem to permanently reside in the jungles.” (Little Paper of March 13, 1915)

Esther considered Great Britain to be greatest the evil in this war, not Germany. She criticized the fact that Britain entered the war because the Germans invaded Belgium, which was a neutral country. Esther supposed that neutrality did not mean anything to the British, since they tried to do invade America in 1812 and also took the side of the confederacy during the civil war. In addition, in 1915 German submarines sunk a U.S submarine, which resulted in the death of 128 people. Esther felt like this incident could have been avoided if the British had told Americans not to sail into a war zone. Also, the British did not send any submarines to protect the American submarine.

The blood thirsty image of Germans depicted in American newspapers during the war was aimed to make American resent Germany. This was all British propaganda, because Sir Alfred Harmsworth, an Englishman, controlled 18 newspapers from big cities in the United States. Furthermore, the British blocked intervention form the Red Cross in Germany, which Esther qualified as inhumane. Esther never thought for a minute that America was a neutral party in the war. America had been benefiting from the war economically. Since the beginning of the conflict, America had been selling guns and ammunition to the parties involved. America was feeding this terrible confrontation. Esther argued that if Americans wanted to stop the war, they could do so by stopping the sending guns and munitions.

Esther was trying to urge people to stop the war industry that was feeding World War I by describing how deadly some of the weapons sold were.  She even criticized President Wilson of not respecting the President Taft law (1912), which was a law that forbade the exportation of arms and munitions to Mexico. The following year, President Wilson confirmed this law to be the base of American neutrality. Esther G. White was against this war and saw every country involved in it as not Christian; otherwise there would be peace.