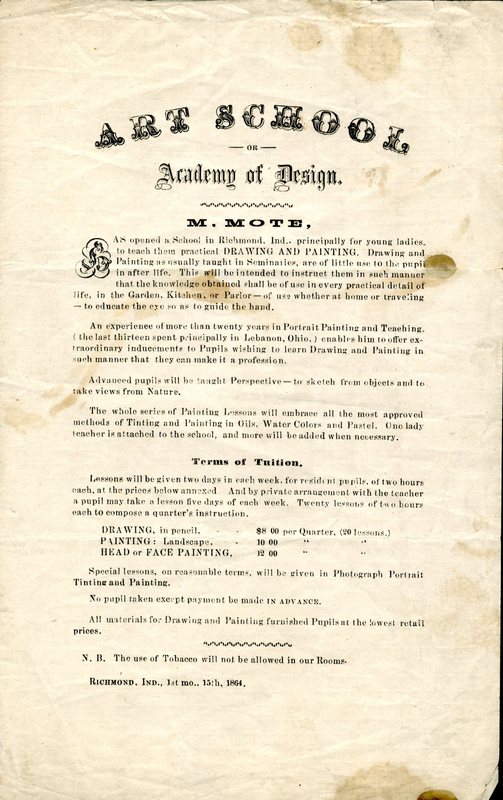 While Marcus’s mainstay was portrait painting, he was known for an assorted array of works that ranged from landscapes to simple sketches of familiar objects. Marcus had “concentrated first on miniatures and then on oil portraits, with an interval as a painter of panoramas and occasional departures into landscape and other painting” (Thornburg 164). In later years, he went on to add “photo-portraits in response to popular demand,” and his business for a time boomed (Thornburg 164). Whilst art was his servitude to God, it was also his business, and he had to bend occasionally to meet the requirements and requests of his patrons. He eventually felt compelled to create a school of art and design for the young women of Richmond, and previously was assisted in the founding of the “Mission School … in 1864,” formally by “Charles and Rhoda Coffin, from whom it received most of its financial support” (Thornburg 202). The Mission School and The School of Design for Women were sources of pride for him, and Marcus frequently visited the school, accompanied by Rhoda, and while it was a source of business, he also sought to do virtuous work, of which included placing more than fifteen orphans into homes (Thornburg 203). Marcus truly knew how to intermingle his financial and spiritual work while keeping them balanced and aligned with the same central structure.