Marcus became more reverent in his faith and embarked on a journey of spiritual progression roughly around 1870, and this can be attributed to many factors. One of these factors was deteriorating health and rapid progression of illnesses, and frustration with his overall declining health. Another aspect was his strong rejection of a morphing society and culture around him. During this time, Impressionism was swiftly storming the art world, and the more traditional styles of artists like Mote were being abandoned. This modern style was known for its bold, thick strokes of paint that were slashed quickly across the canvas to summarily capture the essence of the subject, leaving out many of the details. The idea of dropping the simple details would most certainly stir a flurry of emotions within Mote because this style would not have portrayed God’s truth clearly. Impressionism, being a very loose and fast style, obscured the subject, and complicated views. Also mounting, as society became captivated by Impressionism and other transforming art styles, Mote suffered a sharp decline in business, and the tightening financial burdens gripped him distressingly. He metaphorically construes his feelings through the imagery of “a poor rather old leafless and branchless tree” (Mote, Diary of Apr. 30, 1884). 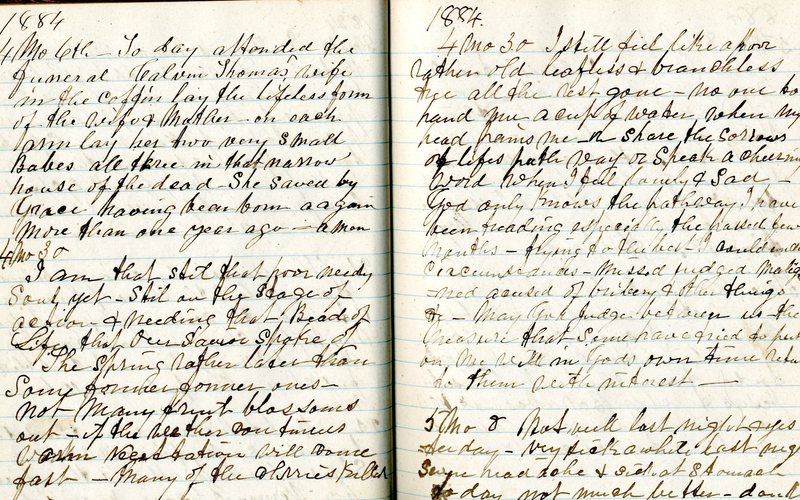 As it can be deduced, as he felt that his art was becoming dusty as the modern movement took the forefront, he prayed that his “life [would] not be a blank in the world” (Mote, Diary of Unknown Date, 1884). Mote strengthened his faith during this time of “turmoil” and one can observe he interpreted these as trials to Salvation, however; Mote was only human, and many times he became questioning of the Lord. When his depression overcame him, and he deemed himself alone and forgotten, he wrote sharply “No one calls to pay or see or care for me – who is to blame?” (Mote, Diary of Jan. 24, 1891). He would often implore that “God [would] manifest thy Holy Presence… so that all doubts… [might] flee away” (Mote, Diary of Unknown Date, 1887). After he became recurrently bedridden in his later years, it came be assumed that he had more time to meditate upon the above as wall as many other matters, and while he rebuked many harsh, thoughtless comments, his trials and tribulations that he so often lamented were, “in the eyes of Friends” perceived as “a baptism of the Holy Spirit” and “something to be endured frequently” (Hamm 5). Quakers, including Mote, believed these tests of faith were what would earn them salvation.

Marcus Mote’s extensive writings and documentations give one a window into his faith, disciplines, and insights as a loyal member of the Society of Friends. He viewed himself as “an old George Fox Quaker” (Mote, Letter Oct. 1, 1888) He enjoyed “old fashioned, Quaker sermon[s]” (Mote, Diary of Sept. 24, 1865). Marcus, interestingly enough, was very traditional and conservative in Quakerism, despite his occupation and a follower of his passion. Marcus Mote, through his numerous letters, editorials, and diaries, was highly against the Revival that gripped the Society of Friends in his later years. In one heartfelt entry, Marcus wrote sardonically “the pretended religious feeling prevailing in our church… in this city, called a Revival – bah!” (Mote, Diary of Jan. 24, 1891). With the arrival of ministers during the Revival, Marcus wrote intensely to Henry Hartshorne, editor of the Philadelphia Friends’ Review, describing Indiana’s Yearly Meeting as “the smallest and least like a Friends yearly meeting… and the most disorderly – when the preacher’s most prominent” (Mote, Letter, Oct. 1, 1888). It is clear that Marcus’s religious opinions and considerations were very traditional, and that he took his responsibilities and loyalty to God very conscientiously. 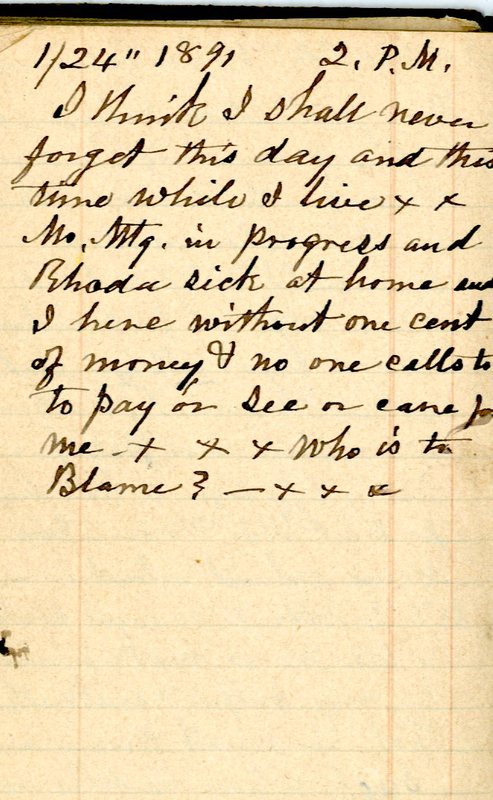 “Quakerism gave one the option to choose, change, and follow one’s inner conscience, there by encouraging and allowing a personal definition of plainness and simplicity” (Lapsansky and Verplank 146). This core belief of the Society of Friends would have fueled Marcus’s skill, and motivated his art. It can be hypothesized from Marcus’s writings and artworks that he was portraying God’s creations truthfully, almost imitating the work of a record keeper, in service to Him. Mote wrote “art rescues [us] from obscurity. One hundred years hence – who will be benefitted – enemies and friends will all be silent – the artist and his patron” (Mote, Diary of Jan. 1, 1869). Through this quote, it can be assumed that Marcus feels that art is eternal and clear, just like the soul, and the messages of God as well as the portrayal of his truths and creations, can be preserved for future generations. Marcus was surrounded by a “a beauty that excited his brain and tingled his fingers,” and if to “record some measure” of His glory was considered wrongful, then Marcus surely had come to combat the morals within him and emerge readied to define the will of God (Thornburg 11). 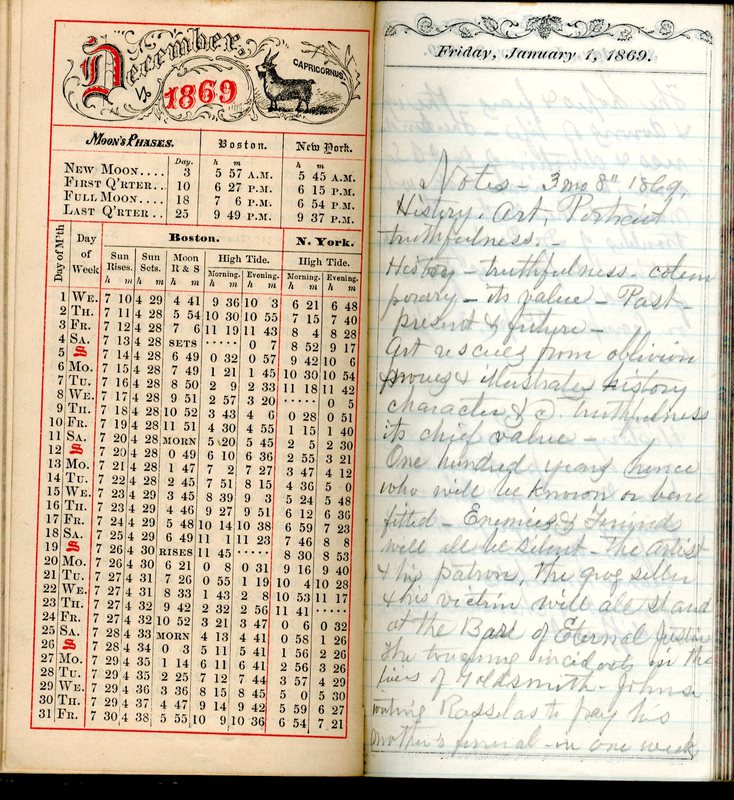 "Art Rescues [us] from obscurity."

Early Quakerism emphasized a deep devotion to the service of God, and his service can be seen in his work. It is clear through Marcus’s writings that he views his art as a servitude to God. It’s reported that “each member of his Mission School class… [was given] a Bible,” and Marcus drew images to illustrate the lessons for both schools “such as the rise of Lazarus, Christ’s entry into Jerusalem,” and many others (Thornburg 203). Quakers believe that “God speaks through symbols and figures, and… reveals to the enlightened soul a profound spiritual truth,” and this can be associated with Marcus’s determination to portray God, his teachings, and his creations and truths (Brinton 32). While it can be noticed in his writings that he worked on many religious works, such as The Penitent, The Cripple at the Gate, Christ Rejected, and many others, he notes that he feels that only he can correctly interpret scripture and God’s concepts, and reports, “many have pretended to interpret scripture but I can only find not more than one in ten that tell the matter correctly” (Mote, Diary of 1891). He proudly recalls reinitiating a religious work he started “near twenty years ago” titled “Christ and the Woman Taken in Adultery,” boasting that “it is an original,” underlining “original” boldly (Mote, Diary of 1891). It is interesting to note that Marcus always mentions briefly about the outcome and distribution of a religious work and it can be supposed that he never actually sells one for profit, which can be seen after the completion of a work he referred to as Christ Rejected, he jotted down in his journal that “D. B. Taylor came and I let him have Christ Rejected” (Mote, Diary of July 26, 1866). He asks God in reference to his next artistic undertaking, “Can I do it creditably to our great, good merciful Master?” (Mote, Diary of Feb. 17, 1891). In other entries, he notes his hopes that “God’s Will be done any how – may I always be subject to His Will” (Mote, Diary of Apr. 3, 1887). Marcus plainly and simply demonstrates a deep desire to do his duty to God, and prayed that His “light… love… omnipresence… be felt and realized and followed more” (Mote, Diary of Apr. 30, 1887). He can be assumed to have desired principally to do be subjected by his God, and do His Will. 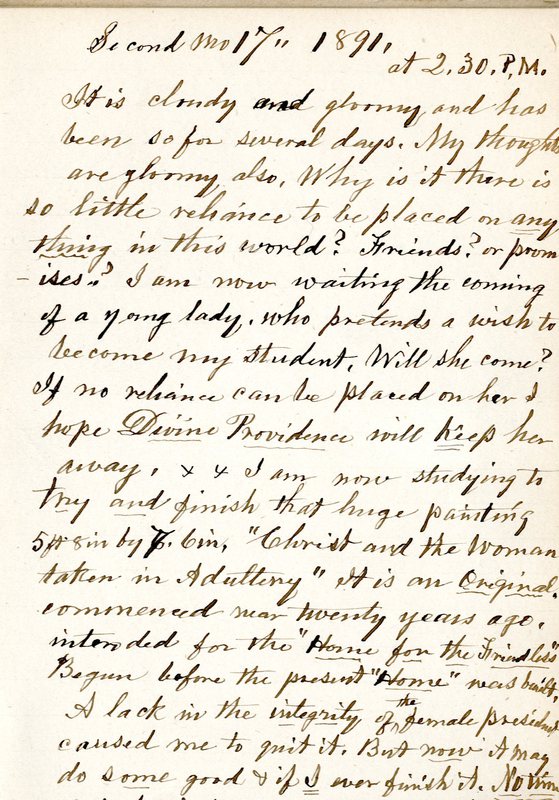 Marcus left behind a legacy of lessons and insights through his meticulously penned writings and arts that will continue to teach future generations of Friends, artists, and those truth seekers. He appropriately addresses all who stumble upon one of his diaries that he leaves “lonely thoughts behind me so that others who follow in this world may see and become wiser by my life’s history” (Mote, Diary of Jan. 24, 1891). He lived his life in service to God, carrying out his Will through the gift that He bestowed upon him. Marcus Mote was not only a Quaker artist, but a devoted, agent of God who desired to present the Lord’s truths faithfully, clearly, and simply for future generations to appreciate, understand, and interpret. 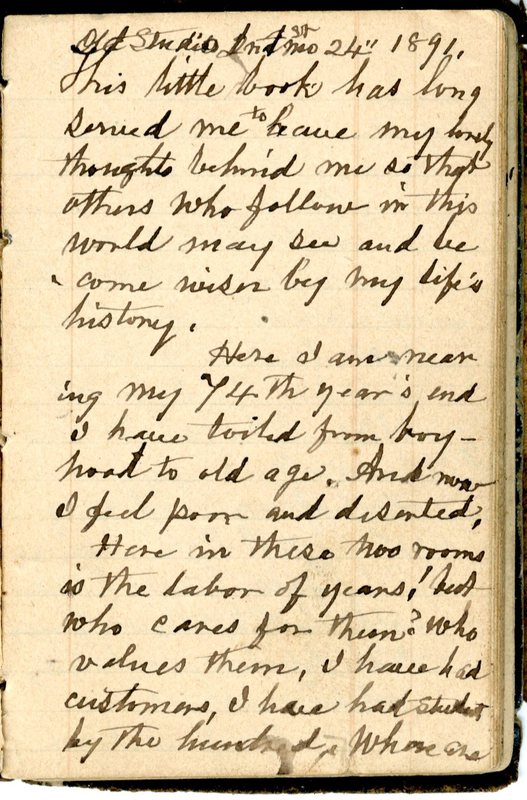