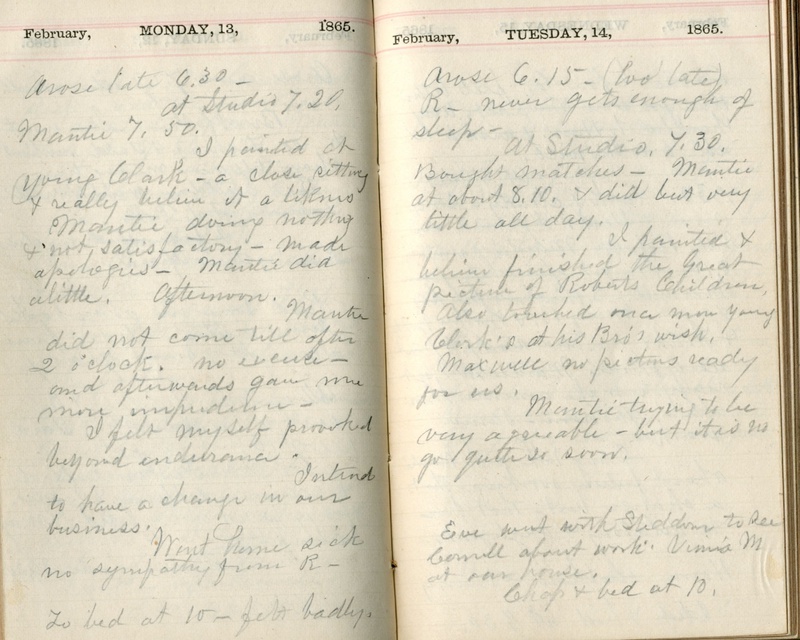 At a glance, Marcus’s studio life, through his narration, gives one the impression of relentless vexations, trials, and labored victories. Marcus recorded daily the annoyances and aggravations that were caused by his assistant, Mantie. The struggles for creative control and power within the studio made Marcus question why “Satan should be let loose so often” (Mote, Diary of 1865). These often resulted in illness for Marcus, which led to emotional strains and depression that hindered him from completing much work. On one occurrence, Marcus chronicles the conflict between them that arises when Mantie wishes to part from the studio early. Mote recalls that “Mantie [was] moody because I needed her too much to let [her] go ice skating,” and adds that she “went at four, and did not come back” (Mote, Diary of 1865). The next day, he notes that she “made apologies… but did little” and was “not satisfactory,” and continues to recollect that she “afterwards, gave me more imprudence,” and “I felt myself provoked beyond endurance – I intend to have a change in business” (Mote, Diary of 1865). Instances like the latter happen quite frequently, and it can be deduced that Marcus did not have the heart to truly dismiss his young assistant. He concludes this particular account bitterly, hinting an approaching slump of depression, and states, “[I] went home sick… No sympathy from Rhoda…” (Mote, Diary of 1865). He also illustrates her brief guilt from her upsets by describing her attempts at good deeds and her desire for forgiveness, however short. “She commended a new course,” Mote wrote, “and cleaned up the studio, dusting books and cleaning tables – quite pleasant” (Mote, Diary of 1865). She was also noted for bringing gifts to Marcus after bitter battles in the studio, and being amiable in conversation to lift Marcus’s spirits on a few occasions. Marcus, especially in later years, turns his displeasures on to his students, and questioning their loyalty to him and their skill. When he would give lessons at the Mission School, he frequently complained that the children were “boisterous and unruly,” and when his “patience ran out, he asked Charles F. Coffin to all him to quit teaching, but Coffin refused” (Thornburg 204). While he grieves that he had few students, in reference to either the school or privately, he frequently noted to himself that he hoped that “May the lord have directed [them] right – for the both of us” (Mote, Diary of 1869). He also commonly judged eager, new students as “second rate,” jotting down that his new pupil had “missed [their] calling” (Mote, Diary of 1865). Marcus was reported to have find “peace and companionship at home” after hours at the studio, however; it would sometimes seem that his depression and anxiety would seep into his home life on many occasions (Thornburg 201).